Walking through the woods of my summer home in Cape Breton, Canada, it’s not difficult to find any number of discarded items, from old cars to washing machines to skeletons of mattresses. It’s almost like finding treasure- these cast-offs of human society have been here for thirty or forty years rusting, the forest has grown up around them, hiding them as it slowly consumes them. They are full of dirt and bursting with plants and animal nests, but their essence, the rusty steel frames, still remain despite many years of decay.

In Evolutionary Construction I portray a steel structure that, while it has been covered with natural fiber and has evolved into a natural form, still carries with it the essence, or residue of its former self in the rust that can be readily seen as it bleeds through the kozo paper. Human existence is fleeting, but like the rust on the paper, the evidence of our lives can be seen even after we are gone. 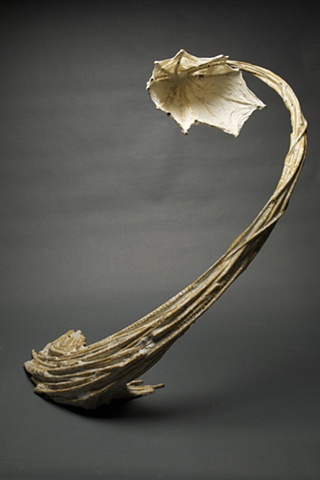